Chatter about a third Bad Boys movie has been filling up the internet nicely for the past 11 years, with rumours that Martin Lawrence and Will Smith would reprise their roles of action cops Marcus Burnett and Mike Lowrey one last time. Up until recently everyone had given up hope until it was announced that Sony Pictures had hired a writer, David Guggenheim, (Safe House), at the end of last year and work had begun in earnest to bring the boys back together again.

It would make perfect sense for Bad Boys 3 to happen right now with Smith’s megastar status getting bigger every year and the mere fact that the sequel, released back in 2003 netted an impressive $273m at the box office. Of course the fact that Bad Boys 3 could be a potential earner for everyone involved has not been lost on Lawrence who tweeted the following last month: 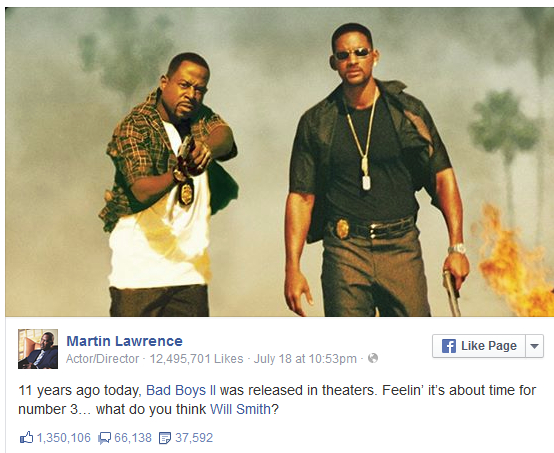 This of course cranked the old rumour machine back into action and when the actor appeared on  Conan this week to promote his new TV series Partners he was asked directly if Bad Boys 3 was in the pipeline, to which he replied:

“I believe so. Yes. I just talked to Jerry Bruckheimer yesterday and he said its real, they’re working on the script, they’re getting close and it all looks good.”

It’s also understood that director Michael Bay is keen to pass Transformers 5 onto someone else which now means he may be free to direct Bad Boys 3, even though he had been ruled out to helm the film before this announcement.